The project MoProLog investigates and standardizes energy efficient logistic modules for the logistical supply and disposal of a modular production in the process industry. A modular palletizer with intelligent energy management is being designed and tested in an application scenario. For the design of a transparent flow of information the Fraunhofer IML is developing a digital twin that enables the system to be autonomous and enables decentralized decision making for system optimization.

Expand all Close all

Many branches of the process industry such as the pharmaceutical and the fine chemicals industry are confronted with a growing uncertainty and dynamic market behaviors, increased requirements for product differentiation and shorter product life cycles. Challenges arise from long periods for planning and realization, rigid production lines and inflexible production layouts. In this context the importance of a modular and flexible overall concept increases. Modular concepts for production and logistics constitute a paradigm shift in the process industry. Modular concepts have been successfully developed in the field of production so that the field of logistics is set to follow up. However, there are no standardized and modular concepts that meet the flexibility requirements of volatile markets. Through the use of these concepts the existing rigid planning strategies shall be abandoned and a flexible and adaptable environment is created. Modular logistic concepts are quite innovative in the sense that they enable a short-term reaction to changing market conditions through up- and down-scaling of the required capacities to provide these capacities efficiently and according to the demand.

The project MoProLog (»Modular Production Logistics«) has been initiated to reach the goal of a modular and standardized production logistics. Together with the consortium partners BASF SE, BEUMER Maschinenfabrik GmbH & Co. KG, Alfred Talke GmbH & Co. KG, Fachhochschule Südwestfalen and Helmut-Schmidt-Universität Hamburg, energy efficient and modular concepts for logistics systems along with their interfaces are being designed. As an example, a modular palletizer is being developed to demonstrate the project results. The project MoProLog is part of the ENPRO project initiative and is conducted and promoted by the Federal Ministry for Economic Affairs and Climate Action within the funding initiative »Energieeffizienz in der Industrie«.

For more information on the ENPRO initiative click here.

The modularization of technical systems refers to the process of the division of a system into spatial and functional parts (modules) that provide defined services. According to a  building-block principle  single modules can be combined to form an overall system. The services of single modules are being orchestrated into an overall process. To enable a reconfiguration with a plug-&-operate principle, standardized physical interfaces and automation interfaces are essential. As part of the MoProLog project, electrical, mechanical and automation-relevant interfaces are specified. The higher goal is to establish an open standard.

As a substantial innovation of modular logictics systems a service-based architecture of a module is aimed at. This is supposed to enable »the calling and monitoring of logistic operations within a modular logistics system being carried out by parametrized services which follow a uniform and standardized open state model. In opposition to conventional systems the direct influence on single actors is not intended during the operating time. Instead, the logistic operations of the modules are being influenced (for example started, terminated, stopped, aborted or parametrized) by controlling the services or changes in the state model.« (Source: NAMUR-Empfehlung 171: »Anwendung des modularen Anlagenkonzeptes in der produktionsnahen Logistik«)

Along with the named above, the specification of the communication and control architecture during the operation time of a modular logistics system is needed. Multiple modules need to be connected in terms of information and an according control logic has to be implemented in order to enable communication through a centralized automation system (vertical communication) as well as decentralized communication with other modules involved in the process (horizontal communication). In this context the approach of the Module Type Package (MTP) – a manufacturer-neutral description for process engineering modules – is used and developed further for the application in production logistics.

The work within the MoProLog project is completed with the development of a digital twin by the Fraunhofer IML. The digital twin represents a systematic mapping of processes, orders, performance objects, resources and production evets of the value creation system in a process model and is thus the central information base for the modules of the overall system. Modules have a certain degree of autonomy, but they need the right information at the right time to make »decisions« (such as shutting down unneeded components to save energy). The digital twin is linked to the demonstrator of the modular palletizer in order to provide this module with the relevant production and order information on the one hand and to collect data (e.g. sensor and energy data, information exchanged, decisions made) on the implemented interfaces on the other. Furthermore, this project lays the foundation for machine learning processes, whereby this data can be evaluated in future research projects and patterns and regularities can be identified on the basis of historical data. This means that predictions and suggestions for the future, such as maintenance suggestions, can be made in the future based on the digital twin to be developed for modular production and logistics systems. (Source: NAMUR-Empfehlung 171: »Anwendung des modularen Anlagenkonzeptes in der produktionsnahen Logistik« / MoProLog research proposal) 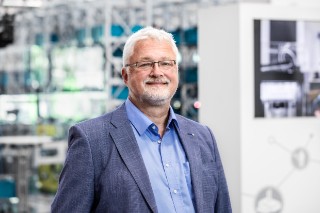 Head of the Digitization Team