The "Low Cost Automated Guided Vehicle" - in short: LOCATIVE® - is a cost-effective automated guided vehicle (AGV). With the functional prototype, which was financed from Fraunhofer IML funds, the Department Machines and Facilities has demonstrated that such a vehicle can be reliably realized. Subsequently, Fraunhofer IML entered into a development cooperation with BITO-Lagertechnik Bittmann GmbH. The LOCATIVE® was further developed to the production stage.

At the beginning of the project, a comprehensive specification was formulated together with the customer. This included, for example, the requirements of potential users, such as load characteristics or environmental conditions. Safety aspects were also extensively considered. The main objectives were to pay special attention to the subsequent series production costs and to ensure simple commissioning and application of the AGV.

In the following conceptual design phase, workshops were held with the customer to decide on aspects such as chassis kinematics and a control concept. Accompanying this process, Fraunhofer IML began with the pre-selection of possible purchased parts. For this purpose, discussions with various suppliers took place, in which not only technical aspects but also cost requirements were successfully addressed by Fraunhofer IML.

After the selection of bought-in parts, the detailed design and development of the control technology started. The technical prototype, which was completed in accordance with the specifications, was tested under industrial conditions. The findings were incorporated into the revision of the entire development status. Finally, a pilot series was produced.

Since 2016 BITO-Lagertechnik Bittmann GmbH has successfully distributed the developed AGV together with the corresponding load transfer stations under the product name "LEO Locative". Its advantages are low costs and simplicity for the user. As there is no control system, the user can autonomously commission the system. The vehicle travels exclusively via tape placed on the floor and receives commands via markers, which are also placed on the floor. The simple load transfer using the KammLAM principle patented by Fraunhofer IML reduces the mechanics of the AGV to the bare essentials, thus contributing to the basic idea of a simple, industrially suitable and yet inexpensive vehicle. 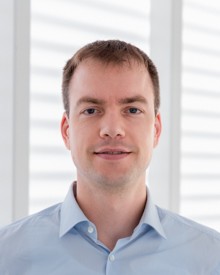